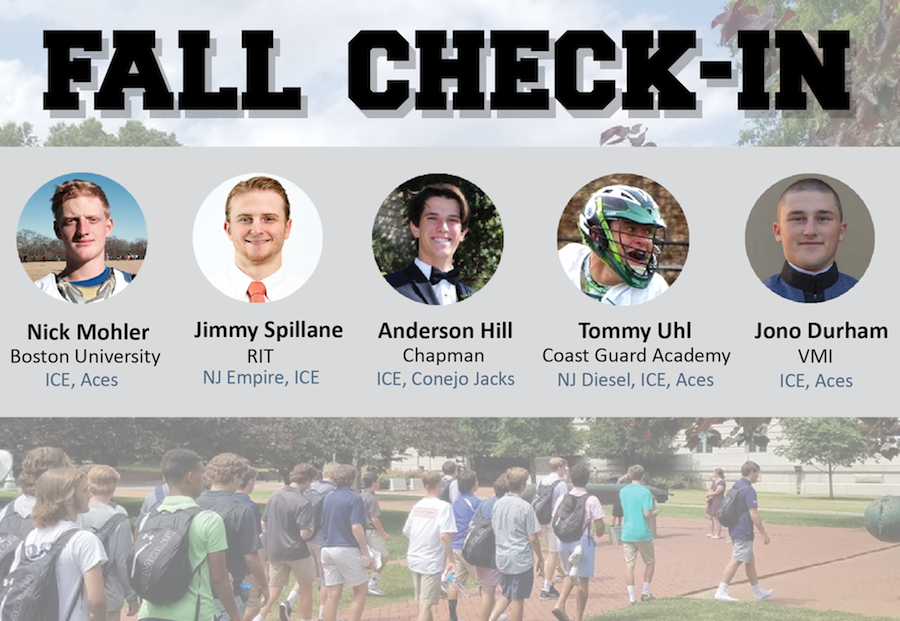 With college fall ball underway, we wanted to check-in with our Trilogy alumni to see how they were adjusting to academics, college life, and lacrosse. We interviewed players at 5 different colleges across the country.

Nick Mohler (NM): BU fall ball has been awesome we lift in the morning and do individual positioning work in the afternoon. My favorite part so far has been the captains practices because they are low stress with yet fast-paced with high energy.

Jimmy Spillane (JS): Right now the main focus has been trying to teach all of the freshmen and transfers our offensive and defensive systems as well as the ride and clear packages. RIT is known for the Canadian Box Lacrosse style we play with, so last Sunday we had an America vs. Canada inter-squad scrimmage for bragging rights. USA won 9-7. It was an extremely competitive game the whole way through.

Anderson Hill (AH): Chapman fall ball is really focused on going back to basics and starting the year off on the right foot. We practice 3X per week. We play indoor for two of those practices and field for the other. We are also in a weight lifting program for our off days.

Tommy Uhl (TU): Fall ball is going well. We started last week with afternoon practices on Mondays at 4pm and then Wednesdays and Fridays at 5:30am. We start practice with a fast-paced 2v1 build-up drill and then do some individual offensive/ defensive drills.

Jono Durham (JD): VMI Fall Ball has been great thus far. The practices focus mainly on teaching fundamentals and doing drills that emphasize fast play and pushing transition which are both back bones to our teams style.

NM: Coming from the West Coast to BU, I l’ve realized that I love talking to people and sharing stories about how social life and lacrosse are different. The weather is definitely a change from the constant 70º and no humidity which was everyday weather in Los Angeles. I look forward to exploring Boston, finding good food, watching sports, and just adventuring around the city.

AH: Even though men’s lacrosse at Chapman is only at the club level, I still have to find a balance between school, sports, and social activities. But lacrosse helps by making me get stuff done before practices.

TU: The Academy is much different from anything I have ever done prior to June 26th, 2017. That day started swab summer, our 7 week training to transition out of civilian life and into the military. It consisted of waking up at 5:30am every morning to reveille, doing various exercise sessions that we called IT (Incentive Training) and ICE (Individual Corrective Exercise). We also learned some cool things like how to sail, and we even got to play some lacrosse during coach’s time. The day concluded with TAPS at 10:00pm. Now that the school year has started, academics and lacrosse take up most of my time.

JD: VMI is a lot different now that I have my freshman year out of the way. I love having a little more time to my day so I can put my energy more towards school and lacrosse.

3. What do you like the most this year so far?

NM: The BU lacrosse team. I was surprised at how nice and accepting everyone on the team was. There are no divisions between grades or small friend groups – everyone hangs out with everyone, I love it. I came to BU and immediately had 45 new friends.

JS: Seeing my confidence grow from my freshman year to my sophomore year. All through high school and Trilogy ICE, I not only faced off but also played offensive middie and attack. Then when I came to RIT, I was only used as a FOGO, but I made it very clear to the coaching staff that I was willing to work as hard as it took to put myself in a position to be more than that for RIT in the future. Now in my second year, I am already being utilized much more as a d-middie and getting to running some transition if the opportunity arises.

TU: The thing I like most about the Academy is the new experiences it offers, like sailing on the USCGC Barque Eagle which I was able to do this past summer. I also love the family atmostphere that the Academy has – everyone wants you to succeed and is willing to help to make sure that you do, in fact, succeed.

JD: A new addition to our program that is bittersweet is our strength coach. The workouts are difficult, but the entire team is seeing major improvements.

4. Any key experiences at Trilogy that helped you prepare for your experience?

NM: ICE taught me time management: waking up early for practices, squeezing in meals before meetings and being extra early to practices.

JS: At ICE, I’ll never forget I was in the cafeteria one day. Coach Boyle came up to me, looked me in my eyes, and told me that he knew the DIII schools that were interested in me and that I’d be crazy not to entertain them. He said that I could get serious playing time for 4 years and compete for a national championship AND more importantly, receive a great degree. Or, I could go to a school that was all-around less competitive just to say that I play D1. He said it with the utmost respect, but it was definitely something I needed to hear. I agreed, and less than a year later I started 20 games for the #2 overall team in DIII and had the blessing of starting at Gillette Stadium in front of 20,000 fans.

AH: Playing with ICE not only helped me acclimate to a very competitive level of play, but it also introduced me to college life. Living in the dorms, eating on a schedule with practice times in mind, making sure to get enough sleep, all little things that ICE made seem less shocking when I got to college.

TU: One thing ICE taught me that has helped recently was how to quickly adapt to being outside of my comfort zone. At ICE we went right into practicing and had to play with people from all over the country that I didn’t know. Each and every one of us had to look past that and work together in order to form a team in only a couple of days that could compete against and beat teams that have been playing together for years. At the Academy, this helped during the summer when I went straight into a military training environment with people I did not know and had to work with them to accomplish tasks and get through the summer.

JD: ICE helped prepared me for DI Fall Ball by exposing me to what college practices are like – intense and physical. ICE taught me that although college practices are far more challenging than high school lacrosse, college coaches expect a player’s very best effort for each and every single rep.