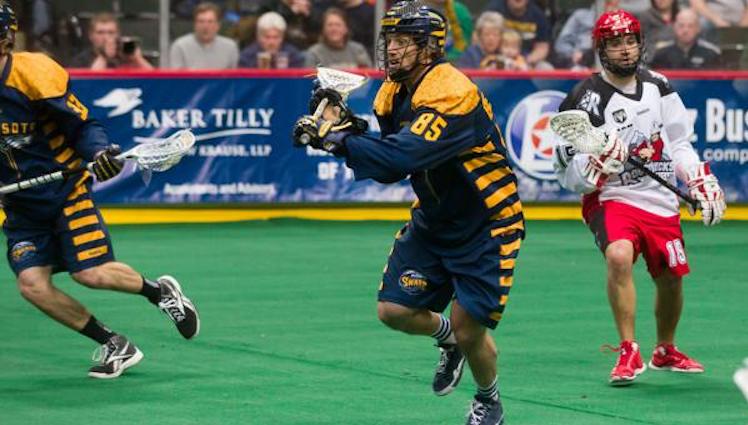 After winning the 2017 NLL Championship with the Swarm, I decided that it was time to hang up my bicep & rib pads and ride off into the indoor sunset. Then I received a call from Swarm owner John Arlotta in November.

“We’d love to keep you involved with the team, would you be interested in doing color commentary for the home games?”

At first I said no, I retired to spend more time with my family and have a few weekends back after all. But after a discussion with my wife and a second request from the Swarm, I decided to jump into the broadcasting booth for the first 5 home games in Gwinnett, GA. Game 1 was slated to be the NLL’s Twitter Game of the Week featuring the Swarm Championship ring ceremony / banner raising and a halftime performance from 2 Chainz!

Here is what I learned with my first experience broadcasting a professional game:

1. You need to be flexible.
The plan was to arrive at the arena at 5pm for the 7:05pm start. We’d do an interview with Coach Comeau of the Swarm, chat with the Rochester coaches about keys to the game, and then record our intro at 5:30pm. Shortly after we arrived we saw a tweet from one of the Rochester players – “finally in the United States: Pittsburgh”, it was 5:15pm. The Canadian-based Knighthakws players and coaches (all but 3-4 people from the organization) had faced a flight cancellation Friday night, then delay after delay on Saturday. They ended up chartering a flight directly into Gwinnett airport and arrived at 8:15pm, 45 minutes prior to the 2nd adjusted start time of 9pm. With a carefully choreographed “run of show” tossed out the window, we had to adjust. Being able to record, simply wait or even change who we were taking direction from, are all challenges I learned about on Day 1.

2. The game moves INCREDIBLY fast.
In the NFL, plays happen, then there are long breaks. The color commentator fills those breaks with useful information pertaining to the play that just happened or a teams’ strategy. In the NLL the ball and action are constantly moving from end to end. It is the play-by-play announcer’s job to keep folks watching or listening on the radio informed. This gives me, the analyst, a very brief window to inject what can often be complicated concepts or descriptions of the “why” that happened on the field. There is plenty of time in pre-game and plenty of time during half-time, but during the game anything worthwhile needs to be condensed into 5-10 seconds of discussion and I have to be ready to wrap up a thought quickly as possession changes.

3. Play-by-play guys are true showmen.
Shout out to Mark Zinno, he is one of the best in the biz. As I mentioned above, it is his role to paint a picture in the viewers mind if they can’t see the action, or aren’t sure who has the ball. A color commentator is usually only as good as the play-by-play man is at setting him up. I’m lucky to have someone who is a seasoned professional, knows lacrosse and commands the booth as my guide in this new role.

4. The game GOES incredibly fast.
The time it takes to play a professional indoor lacrosse game has not changed from the time I retired. Four 15-minute quarters take up just about 2.5 hours. But when you are playing, there is momentum, there are times when the clock seems to be c-r-a-w-l-i-n-g (usually when clinging to a lead) and there are breaks where you strategize and rest. When commentating, you are ON the entire time, other than the brief minute and thirty second TV timeouts. To use the bathroom I literally had to sprint as soon as it went to commercial and barely made it back in time. The game ran from 9pm to 11:30pm, but it felt like I spent no more than 15 or 20 minutes in the booth.

5. You get immediate feedback.
With the game being a twitter “Game of the Week”, I was quick to see how I was doing, at least in the eyes of the fans and media. For the most part, I received positive reviews and appreciated some helpful feedback. One of my favorites: “@MBelisle85 and @GeoffSnider are hopefully where the future of NLL broadcasts are heading. Recently retired players who are current, very insightful and uncensored with honest opinions. Terrific job by both guys”. On the flip side I also got to see “Whoever is doing the color commentary in this game is downright terrible #ROCvsGA” – Thanks for the constructive criticism @MikeStrawMedia, I’ll work on being less terrible next broadcast!

6. I can’t wait for Game 2.
With all of the above said, it was a great learning experience and a ton of fun. I am looking forward to being back in the Hive this Saturday, January 6th as the Swarm take on the Saskatchewan Rush. Not only will it mark the reunion of the past Champion Cup finalists, but it will be the 2nd January 6th game I watch from the sidelines, as my son was born exactly 1 year prior. I’ll never forget watching the Swarm win from our hospital room, cradling (pun intended) my new son to sleep. Hopefully like that night in 2017, the Swarm will get a W and George will sleep like a baby!

Want to catch Mitch Belisle in action? Tune into NLLtv.com this Saturday!